Update: Where is Tiger Woods? And Scottie's final hole drama at The 2022 Masters

Tiger Woods’s hopes of a victorious return from career-threatening injuries evaporated on Augusta National’s greens on Saturday while Scottie Scheffler seized a three-stroke Masters lead. Woods, 14 months removed from a car crash that left him with injuries so severe he feared he might lose his right leg, saw his hopes of a stunning comeback for a sixth green jacket come undone with his worst-ever Masters round, a six-over par 78.

The fact that the 46-year-old was even able to tee it up — and make a 22nd consecutive Masters cut — was astonishing.

But at nine off Scheffler’s lead to start the day, Woods knew he needed something sensational to give himself a chance come Sunday, and instead he posted a round worse than the third-round 77 he shot in his 1996 debut as an amateur.

“It’s just like I hit a thousand putts out there on the greens today," said Woods, whose prior mastery of the unforgiving, undulating greens of Augusta helped him to five Masters titles.

“I felt like I didn’t really hit it that bad, but I had four three-putts and a four-putt," Woods said. “I just could not get a feel."

Woods’s seven-over par total of 223 put him 16 strokes behind Scheffler, who survived drama at the 18th to card a one-under par 71 for a nine-under total of 207.

The 25-year-old Texan takes a three-shot lead over Australian Cameron Smith into the final round.

On a cold, windy day where scores soared, Smith carded the only round in the 60s with a four-under par 68 for 210.

Smith was two strokes in front of third-place South Korean Im Sung-jae, who shot a one-under 71.

But, once again, it was Woods who drew the spotlight.

A three-putt at the opening hole proved a harbinger, a birdie at the second — where his shot out of a greenside bunker barely missed finding the cup for eagle — proving only a short respite.

From the fairway at the fifth, Woods left himself 65 feet, and he could only watch in disbelief as his three-foot bogey effort circled the cup and stayed up.

Bogeys at the ninth and 11th followed before he drained a 14-foot birdie at the 12th and two-putted from 27 feet for birdie at the par-five 13th.

The thousands following Woods’s every move tried to will him on, cheering and shouting encouragement at every hole, but he closed his round with bogeys at 16 and 17 and another double-bogey at the last.

While Woods acknowledged on Thursday that just making through his first competitive round in 17 months was a victory of sorts, he made it clear he would be looking for better things on Sunday, like getting himself back to even par.

Woods was hardly the only one struggling in the cold, blustery conditions, where the scoring average was 74.5 shots and only seven players were under par for the tournament after 54 holes.

Scheffler was 10-under through 17 holes when his tee shot at 18 clipped a tree branch and ended up in dense undergrowth left of the fairway.

It took a concerted search to find his ball and after wading into the bushes to see the situation he took and unplayable lie, belted a shot up to the green and limited the damage to a bogey.

“We saw the guy who always finds the balls kind of panicking. I thought, ‘Oh crap,'" Scheffler said.

“Just getting it out of the bush and trying to make my five was key," added Scheffler who said his heart rate “went up when they couldn’t find the ball but it went back down when they found it."

It was a dramatic end to a round that featured half a dozen birdies and five bogeys, Scheffler maintaining his air of methodical calm throughout.

“You hate bogeying the last hole, but the way I bogeyed it, it for sure felt like a par," Scheffler said. “Definitely a good finish to the day."

Smith finished tied for second behind Dustin Johnson in 2020, when he became the only player to shoot four rounds in the 60s at the Masters.

The Aussie said playing within himself in the challenging conditions was the key to his round.

“I didn’t try to smash any drivers off the tee. I just tried to give myself opportunities," said Smith, who added the toughest part of the day for him was “keeping my hands warm."

“It was brutal. I think off the tee with this west wind there’s not many holes you get straight downwind or straight into the wind.

“You get lots of crosswinds and can get quite tricky into the greens and hitting different shapes and trying to judge the wind as well."

There was some final hole drama of the third round at the Masters, which sets up the prospect of a thrilling final day.

Scottie Scheffler, who looked to be heading in with a commanding lead, hit a wayward tee shot on the 18th hole, with his ball flying into the bushes to the left.

The newly crowned world No. 1 eventually found his ball, which ended up deep in the foliage, and was forced to take a drop just to be able to play his next shot.

He was able to produce an extraordinary shot to get his ball near the green but the penalty meant he finished with a bogey on the final hole, eventually carding a one-under par 71 on Saturday.

It means the US golfer has a three-shot advantage over second-placed Cameron Smith who surged up the leaderboard with his own excellent round of 68.

With just 18 holes left at Augusta National, Scheffler has a chance to win his first major and continue his excellent run of form. 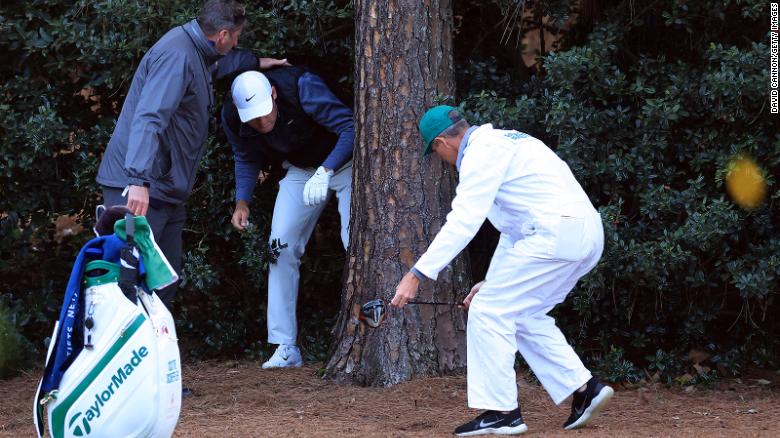 Scheffler prepares to take a drop on the 18th hole during the third round of the Masters.

Last month, he was named the world No. 1 after a magnificent stretch in which he won three PGA Tour events in five starts.

So coming into the 2022 Masters, a tournament at which his best finish came last year when he finished tied for 18th, the 25-year-old was one of gallery's favorites.

And he rewarded those beliefs, earning himself a five-shot lead after 36 holes.

Despite holding the Masters lead, the pressure never seemed to daunt Scheffler, as he laughed and joked with caddie Ted Scott during his third round on Saturday.

He oozed calmness as he quickly added to his overnight eight-under score, jumped to 10-under on the third hole.

A brief blip on the fourth hole meant he dropped back to nine-under but a blistering stretch of golf -- in which he displayed all his qualities -- helped reassert his lead as he went to 11-under.

All the while, Smith was making his move. The Australian player started the day on two-under, but vastly improved after a disappointing Friday as he showed glimpses of his best around the famous course. 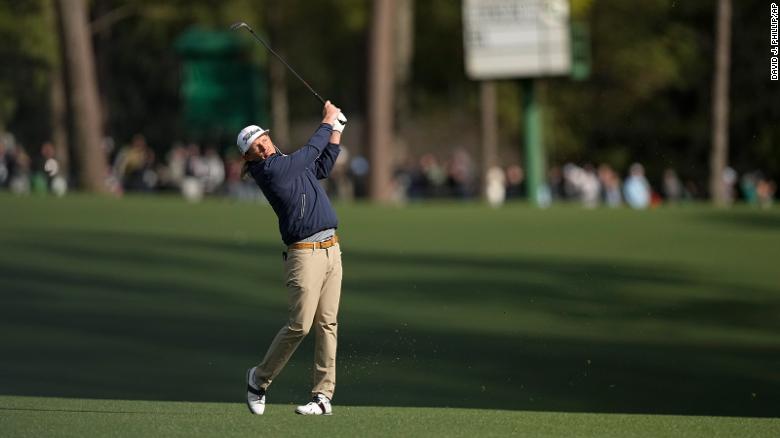 Smith hits on the 13th fairway during the third round at the Masters.

The 28-year-old finished six-under -- carding the only score under 70 on the day -- to move into second position with Scheffler still out on the course, and thrust himself in the running for the green jacket.

However, just when it seemed like everything was lining up for a big Scheffler lead heading into the final day, some small cracks began to appear in his typically steadfast game.

Consecutive bogeys on the 14th and 15th holes cut his lead down to just three, with two holes remaining.

He recovered in magnificent fashion just a hole later, claiming a vital birdie on the penultimate hole to once again stretch his lead to four. 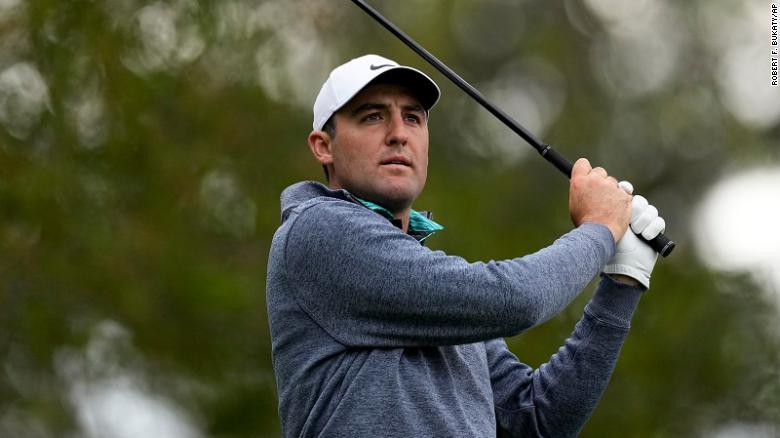 Just when it looked like he was running away with it thought, his wayward drive on the final hole made things more enticing.

While he could've lost his head and been flustered, he remained calm and collected to salvage a bogey and maintain his lead.

With just 18 holes left to go to decide the winner of golf's most prestigious major, Scheffler remains in pole position to claim his debut Masters title.